The  following words appear in the Apple Music description of “Sick Boy”, the newest single from EDM frat boy duo The Chainsmokers: “serious,” “socially conscious,” and “anthem”. The sheer absurdity of those words appearing together in any relation to The Chainsmokers was enough to warrant a listen, if only to glean the going rate for delusion these days.

You see, The Chainsmokers are a particular kind of music act, the kind that has proliferated in the last two or three years. They are a two-man factory of mindless, generic EDM-adjacent pop that is just good enough to justify near-endless radio play and astronomical streaming numbers. There is nothing remarkable or exciting about their sound. Their lyrics are quarter-baked reflections on youth and sex that seem to confirm every negative opinion anyone’s ever had about millennials. After their songs end, you go on about your day, completely unmoved by what you heard and barely cognizant of who was responsible. And you know what, that is totally fine. No one needs The Chainsmokers to be anything more than what they are. 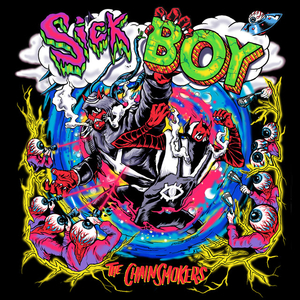 And yet, for some reason, Alex Pall and Drew Taggart are jonesing for something more. The same guys who used a Billboard profile to boast about their penis sizes are trying to elevate the conversation, and “Sick Boy” is what they came up with. Over muddled, moody synths, Drew warbles about the evils of a bunch of tangentially related sociocultural issues, like coastal elitism (I think), narcissism (ok) and, but of course, the haters. It doesn’t help in figuring out their deal when the song’s lyrics are barely coherent statements that don’t amount to anything meaningful. The closest they get to a moment of sincerity – a lament of life’s value measured in social likes – barely registers amongst the harsh clash of at least three melodic concepts.

The Chainsmokers are totally serious about “Sick Boy: and its message, whatever they think it is. The problem for them is that a career built on mediocrity does not beget a believable switch to social consciousness. I can’t imagine anyone buying that these two suddenly realized the extent of their vapidity and are itching to change. “Sick Boy” is too lazy to be described as cynical, and too dumb to be a parody; it’s just a pointless effort that absolutely no one asked for.

If you’re so inclined, you can listen to the song below: