Skip to content
There are no winners in this most pointless of rap battles.

This time last year, Migos released “MotorSport”, the lead single from their album Culture II. The track was less about them than their two guests: Nicki Minaj and Cardi B. It was the first time the two women – feisty incumbent Nicki and scrappy upstart Cardi – appeared together on a track. “MotorSport” should’ve been a momentous music occasion, a celebration of two wildly successful women in hip-hop showing the boys how it’s done. Their highly visual styles should’ve made for a fun, engaging music video that toyed with their inevitable rivalry. Their rabid fanbases and rap’s stranglehold on the charts should’ve secured at least one week atop the Hot 100.  Instead, the song is a glorified footnote, peaking at #6 and then practically vanishing.

With ten rapid succession posts on Instagram last night, Cardi all but confirms why “MotorSport” sputtered: she and Nicki Minaj really don’t like each other. Cardi was responding to Nicki’s most recent episode of Queen Radio on Beats 1 and claims she made about that infamous Harper’s Bazaar ICONS party during New York Fashion Week, where the two nearly came to blows and Cardi was ejected with a lost shoe (apparently tossed in Nicki’s direction) and a visible knot on her forehead. The Instagram videos are worth the watch, but in Cardi’s nutshell: Nicki Minaj is a pressed, jealous, hating liar who has gone to incredible lengths to stop Cardi’s success. Crack open the nut and you’ve got a  steady stream of schemes, plots and secret deals that Mona Scott Young would be a fool not to lift for an upcoming Love and Hip-Hop season. 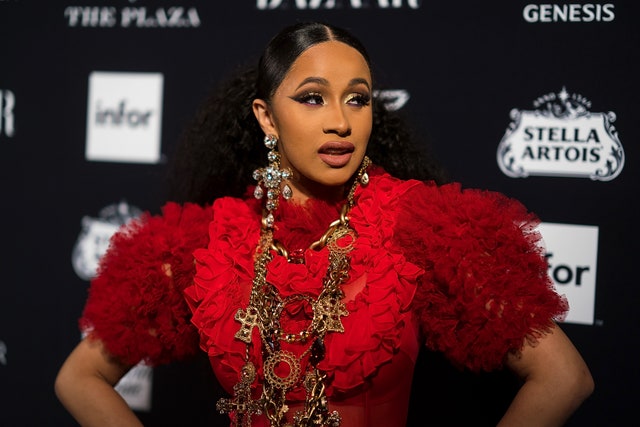 Cardi’s response feels tired, as in she sounds exhausted and exasperated recounting all of the ways Nicki has allegedly slighted her. The feeling is mutual. As thrilling as celebrity messiness can be for a moment, this feud feels especially nasty and thoroughly pointless, serving only to diminish the exemplary accomplishments of both women. Cardi has the world in the palm of her hand at the moment: three #1 singles, high and low fashion adoration, personal joy as a new mom and wife to Offset. She is a full-stop cultural phenomenon. How does she distract from all of that? By fighting with Nicki Minaj at a NYFW party where event security had to physically remove her, sans shoe. The altercation hasn’t done any immediate damage (“Girls Like You” is on its sixth week at the top, and new single “Money” is the top-streamed song on Apple Music), but it bolsters the narrative that Cardi is reckless and out of control. The Instagram clapbacks advances it further. For all the talk of stopping and securing bags, releasing communiqué on preliminary endorsement deals with Diesel (since deleted) is the kind of move that would make future business partners skittish that Cardi, on a tirade-driven whim, will expose them too. Cardi’s raw, unpolished realness has endeared her to millions, but it can also be a professional, even legal, liability. The public loves to build and then tear people down, and each of Cardi’s outbursts hasten the inevitable downfall. Lucky for Cardi, superstardom is still new for her, so much of this period could be attributed to naïveté and youthful growing pains.

Nicki Minaj, on the other hand, can’t claim the same. As the uncontested dominant of female rap for the last decade, Nicki’s been around the block several times over. Her success isn’t up for debate: more Hot 100 entries than Aretha Franklin, millions of albums  sold, and an intensely loyal fanbase are the spoils of her labor. And yet, the presence of another successful mainstream female rapper is vexing to Nicki, to the point of near self-destruction. Assuming Cardi is telling the truth on Instagram, Nicki has gone to extraordinary lengths of subterfuge and harassment, because another woman dared to succeed in her field. Even more troubling, she allegedly activated that intensely loyal fanbase to attack Cardi, her friends and family by leaking her number. It isn’t the first time she’s been accused of such behavior, not even in the last six months: she went after several journalists on social media for reporting facts about her album Queen, and encouraged her fans to do the same. Weaponizing her largely-teen fanbase is just one thread of a tapestry of bizarre behavior Nicki has exhibited in the lead-up to the release of Queen and afterwards. Queen Radio has served as a sounding board for industry conspiracy theories, strange proclamations about Harriet Tubman, homophobic insults and an abundance of obnoxious sound effects. And who can forget her now-infamous, one-sided feud with Travis Scott and Kylie Jenner (and baby Stormi) after his album outsold her debut week and she was relegated to #2? Nicki insists that it’s all for the sake of entertainment, but the ferocity behind it all suggests she is protesting way too much. Whatever the reason, Nicki’s behavior isn’t reflective of an unshakeable queen of rap. Getting into random squabbles and using your fans to stamp out dissent is petty, small and beneath someone of her stature in the industry. At worst, her obsession with the minor slights to her commercial and critical success suggests a need for an extended self-care break.

Suffice to say, neither of these incredible women have come out well from this rotten beef. It would be something different if either of them were dropping verses that addresses their barely-there issues while showcasing their crafts. Instead, we have tossed shoes, leaked cell numbers, and canceled features and clothing deals (sidebar: Diesel, Steve Madden and Little Mix are all ridiculous for hopping into last night’s mess). Nothing creative or transformative will come from Cardi and Nicki feuding; the only result will be both of them looking worse for the wear, when their energies could’ve been better spent elsewhere. Cardi B and Nicki Minaj don’t have to be friends, but they could’ve put aside their differences (or similarities) long enough to help each other succeed.

The feud seems to be over for now, both retreating to their respective corners, hopefully to take stock of the scorched earth they’ve left in their wake. All of this drama for a bundle of missed opportunities and inconsequences. They’ll both be fine, but god, what a waste this all turned out to be.