John Krasinski is wasted in this watchable but underwhelming origin story.

Who is Jack Ryan, and why should we care?

The CIA agent, protagonist of Tom Clancy’s hugely successful books and several box-office hits over the last twenty years, is more nebulous household name than flesh-and-blood, three-dimensional character. He is lacking in definable traits, like James Bond’s shaken-not-stirred sensuality or Ethan Hunt’s death-defying hubris. Jack Ryan has endured in the annals of pop culture just by existing, until some studio picks him up, dusts him off and tosses him into the geopolitical crisis du jour. Yet, Ryan is a malleable-enough subject that, as exhausting as today’s reboot culture is, he could be molded into someone interesting enough to be worthy of his cultural cachet.

Tom Clancy’s Jack Ryan is Amazon’s attempt to cash in on it. The eight episode series takes its titular character back to his early days at the CIA, before the days of Harrison Ford and Ben Affleck. Ryan, this time played by John Krasinski, is an upstart analyst who believes he has uncovered the financial underpinnings of a terror plot by Suleiman (Ali Suliman), a fabled Islamic extremist with bin Laden-esque ambitions. He initially faces skepticism from his gruff new boss James Greer (played spectacularly by Wendell Pierce), but the lead pans out and Ryan is quickly swept up in the chase to stop him, learning the nuances of CIA field work and politics along the way. 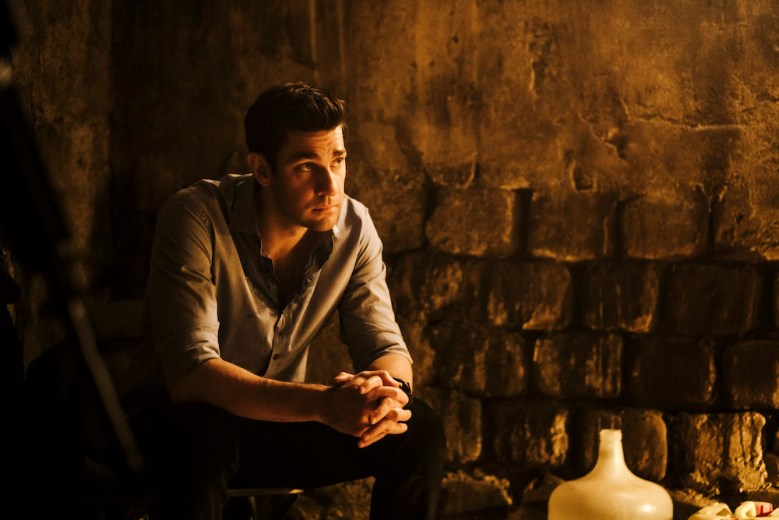 Jack Ryan’s greenness in the field is the extent of any real character development. The series may bear his name, but Jack Ryan often treats him as a bit player against far more interesting characters than he is. We spend little time getting a real grasp on who Jack Ryan really is, let alone how he is processing the monumental changes in his life. There are brief glimpses of a trauma from his Marine days, but they aren’t fully explored until it’s too late to care. All we can glean about Ryan is that he has the right instincts even when he’s in over his head, which is barely enough content to fill half of the narrative space he’s given. That also leaves John Krasinski with very little to do besides capably shoot a gun and occasionally look disturbed by what he sees. Krasinski certainly looks the part with his muscular, lightly scarred physique, but the series seems to misunderstand his strengths. Krasinski is best when he can be charming, self-effacing and latently vulnerable, as he is exploring Ryan’s budding relationship with Cathy (played by the underused Abbie Cornish). Not letting those qualities to fully seep into the fairly blank characterization of Ryan is a massive missed opportunity. While it may not be accurate to say Krasinski is miscast, he deserves a lot better than this.

The other half of the Jack Ryan narrative is granted to the Suleiman family, headed by terror mastermind Mousa. The series crafts a surprisingly nuanced portrait of this Arab family marred by terrorist violence: Mousa’s moments of kindness, grace and honor suggest a different path had xenophobia not reared its head in his youth; his wife Hanin (Dina Shihabi) must grapple with the encroaching horror of her husband’s actions and protecting her children in a world openly hostile to them. Ali Suliman delivers a standout performance, finding the shades of humanity in Mousa and never letting go of them, even in his more heinous moments. The Suleimans’ arcs are infinitely more compelling than Ryan’s. As it were, when the series tips the scales back to Ryan away from the Suleimans in its final stretch, it suffers significantly.

Jack Ryan is just as unmoored as its ostensible lead, unsure of what it wants to say about, well, anything. Yes, it’s a political action thriller, but what of the politics? The series is set in the midst of the Syrian refugee crisis, but offers no substantive commentary, nor allows its American characters to truly engage. Islam is handled with some nuance through the Suleimans and, surprisingly, James Greer, but an argument made about European-Muslim hostilities feels particularly tone-deaf and hypocritical coming from an American series. A side plot with tangential relevance to the main action deals with American interventionism, but offers nothing but a frankly bizarre resolution that adds nothing to the story. To its credit, the action and thriller bits do hold where the politics doesn’t, earning its mature rating with highly kinetic, genuinely gripping action set pieces. Still, there are moments of gore and violence that feel gratuitous, as if they’re meant to serve as distractions. Landing somewhere in the middle of great action and disappointing themes is a decent plot, with one too many dangling threads that are tied together in a giant leap of narrative convenience that happens way later than it should.

Jack Ryan is a very capable action series, with enough gunshots, explosions and tense war combat sequences to fill a lazy afternoon. If you’re looking for a thoughtful examination of international law and order, or of the title character himself, you’ll be left wanting. Jack Ryan is as anonymous as he’s ever been and even in the era of prestige TV, that doesn’t appear to be changing anytime soon.