Black Panther is more than just another superhero film.

For me, and millions of other people of color, it’s a reaffirmation of identity, a celebration of cultures often ignored and misunderstood by the mainstream. It’s a deconstruction of the long-held, cruel, racist Hollywood myth that black experiences didn’t deserve space in the cinematic landscape. For those younger than me, and even the eight-year old still inside of me, it’s a chance to finally see ourselves as heroes and leaders of our own destinies, not relegated to one-dimensional tropes. The cultural and emotional impact that this film will have, simply by existing, is incalculable.

Black Panther does more than simply exist, though; it roars with vitality and relevance that resonate far beyond Marvel’s bloated bubble. Even with a wink here and a nod there to previous superhero exploits, the film is squarely focused on T’Challa (Chadwick Boseman), the newly-crowned king of Wakanda. Following the death of his father in Captain America: Civil War, T’Challa, his military general Okoye (Danai Gurira) and Wakandan spy Nakia (Lupita Nyong’o) return to the cloaked African nation and all of its technological splendor so that he may formally claim his throne and protect his people from the outside world as the new Black Panther. His plans are interrupted when Ulysses Klaue (Andy Serkis) and Erik Killmonger (Michael B. Jordan) team up to sell long-stolen vibranium, Wakanda’s precious natural resource that powers its marvelous advancements, in South Korea. While Klaue is driven by greed and racism, Killmonger’s reasons for the theft are a lot more intricate and personal. T’Challa’s interaction with the furious young man throws everything he knows into crisis, and he must decide how he will lead his kingdom forward once the dust settles.

Ryan Coogler, director of Fruitvale Station and Creed, isn’t satisfied just telling a long-overdue post-origin story. Black Panther is a deep exploration of T’Challa’s world and how it shapes his heroism, and Coogler and his team construct it with incredible intricacy: the complexities of his culture, his beautiful people, and of course, his stunning homeland. Wakanda is the most fully-realized locale in the Marvel universe; every landscape is steeped in African tradition and style, rich and vibrant without slipping into the shallow spectacle. Even at its most fantastical, Wakanda lives and breathes with purpose beyond serving as a backdrop. The same can be said for T’Challa’s friends and family. The role that black women play in this film cannot be understated; it’s downright revolutionary. In Black Panther, they are not damsels in distress or femme fatales that distract the hero; they are elite warriors, politicians, military tacticians, undercover spies and brilliant scientists. They have distinct opinions and personalities, and claim responsibility in Wakanda’s success and the king’s development. For his part, T’Challa isn’t threatened by the powerful presence of the women around him; he regards them with admiration, respect and camaraderie. Coogler’s intimate, thoughtful attention to detail pays off handsomely, with a wholly-contained world that is deeply engaging and begs for return visits.

Beyond the wondrous locations and world-building, Black Panther is a multi-layered commentary on the state and meaning of Blackness in today’s world. The film examines feminism, masculinity, technological responsibility and colonialism at various levels, but the prominent theme involves leadership and responsibility to community. The film’s chief physical and ideological conflict comes from T’Challa’s clash with Killmonger, who accuses Wakanda of abdicating its duty to black people around the world by isolating itself and refusing to offer any sort of aid or support. With access to vibranium, Killmonger posits, centuries of subjugation and suffering would be over, and his goal is level the playing field by any means necessary. When you consider those means include murder, one would assume that Panther is firmly against his worldview, but it’s not that simple. Killmonger’s arguments are given room to breathe, rooted in a tragic backstory that contextualizes his brutality and humanizes him. T’Challa, a follower of his country’s isolationist policies, understands the ramifications of his predecessors’ failings, but also knows that Killmonger’s methods will cause more harm, which leads to the classic but subverted showdown of good versus bad. One of the film’s few weak points is the predictability of that battle’s outcome, and how Marvel’s most riveting villain since Loki isn’t afforded a similar path to redemption. Still, Coogler doesn’t offer easy responses to Killmonger’s challenges, leaving T’Challa and the audience to grapple with them long after the credits roll.

Much can be said and written about Black Panther’s thematic complexities, but it is a superhero film at its core, and an excellent one at that. It is consistently thrilling and highly kinetic, the camera praying it can keep up with the nimble action sequences. There are a few times when the fast-paced staging doesn’t quite work, or when the inevitable presence of CGI can be distracting, but Coogler does masterful work minimizing their impact on the overall experience. Much of that is accomplished in the characters’ interactions, especially in T’Challa’s inner circle. Levity is a Marvel trademark, and Coogler and co-writer Joe Robert Cole continue that tradition by infusing  humor that feels genuine and authentic to the film’s relationships and culture. Whether it’s Shuri (Letitia Wright), Wakanda’s chief scientist and T’Challa’s younger sister, shading his choice in footwear, or M’Baku of the rival Jabari tribe subverting stereotypes with a quip about vegetarianism, the laughs are plentiful and earned. 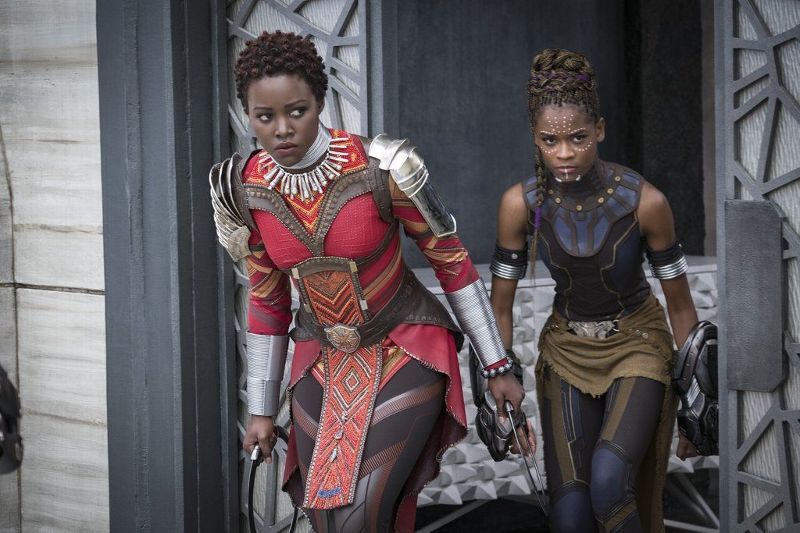 Black Panther’s cast is an embarrassment of riches, stacked with a diverse selection of impeccable talent. Chadwick Boseman, the Wakandan king and titular superhero, exudes grace and elegance with every move he makes and word he speaks. Ironically, Boseman has the less showier role, but he still commands attention with regal authority and open vulnerability. Michael B. Jordan, playing against-type as the villainous Killmonger, channels his charisma into a thoroughly convincing powder keg of righteous anger and ruthlessness. He is a standout, as is Letitia Wright, who steals every scene as Shuri with killer one-liner reads and the youthful exuberance to back them up, and Danai Gurira, whose Okoye demands obedience in the face of her overwhelming presence. Lupita Nyong’o, Angela Bassett, Daniel Kaluuya, Winston Duke, Martin Freeman; there isn’t a weak spot in this sterling array of performers.

There is so much more to unpack, but the ultimate takeaway is that Black Panther feels like a crucial shift in cinematic comic book storytelling. Unprecedented box office receipts aside, the film has charted a path forward for a genre at risk of collapsing under its own weight. It proves that superhero films can have real-world ramifications and relevance without being dour and humorless, and challenges the need for overt deference to a film’s overarching universe. Black Panther’s greatest legacy will be how it shatters the notion that diverse depictions of super-heroics aren’t artistically or commercially viable. To the satisfying contrary, Ryan Coogler and his crew have taken the story of a black man, surrounded by black women, and molded it into the most compelling and resonant film in the Marvel canon.

3 thoughts on “‘Black Panther’ Leaps Ahead to Lead Marvel into an Inclusive, Complex Future”