To be perfectly honest, Apple breaking into the streaming music market wasn’t terribly exciting to me.

After Tidal famously bungled their launch a couple of months ago, and having been a longtime user of Spotify, I didn’t really see what Apple could offer. If anything piqued my interest, it was the convenience of the entire (okay, most of the) iTunes catalog on my iPhone, alongside my existing library. Other than that, last month’s Apple Music announcement drew a “meh” from me.

Of course, I happen to be a serious Apple fanboy, so I was ready to download iOS 8.4 when it went live around 11am Tuesday morning. Opening the Music app, I was met with a completely redesigned and refreshed interface, with vibrant colors and broad artist panels. I was also met with my entire music library vanishing because I turned on iCloud Music Library, which you can read more about here. For those with large, slightly complicated music libraries like myself, I would highly suggest keep that option switched off.

Beyond that massive hiccup, my expectations for Apple Music were pretty much met. Every song and album I could’ve wanted was available to stream alongside my music library, allowing me to create playlists and radio stations. The “For You” tab offered me some pretty spot-on playlists based off of my tastes, chosen when you first open the app. The “New” tab that is effectively useless, simply repackaging what’s on the iTunes storefront. Also useless is “Connect”, which seems destined to flop as hard as Ping did without serious social media integration. It’s all shoved right there in the app, like I thought I had wanted, until I realized just how confusing and jumbled all of the menus and options would be. Those three dots that appear next in the “Now Playing” panel are probably the most aggravatingly random UI choice Apple has made in awhile, since the options it offers always change, and it’s not clear why. Frankly, for a brand that has made its billions on its promise of simplicity, it’s shocking how complicated Apple Music is presented.

If Apple Music was only comprised of the above, then it would be a Maps-sized mess. Thankfully, Zane Lowe, Ebro Darden, and Julie Adenuga exist. 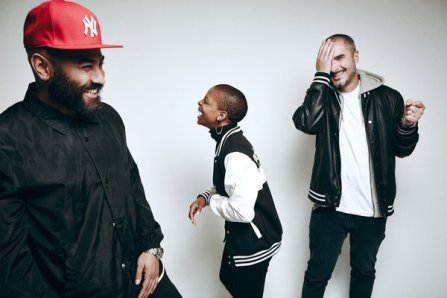 The three DJs and proclaimed tastemakers anchor Beats 1, the massive radio station that Apple has positioned as the tentpole of its service. Beats 1 is global, 24/7, and offers passionately curated music and commentary from its three stars and guest DJs including Dr. Dre, Elton John, and Ellie Goulding. It’s a massive undertaking, for sure, and skepticism of its execution is guaranteed. I mean, what’s so special about a global radio station?

Nothing, without its star anchors. A huge deal was made about the prolific Zane Lowe leaving BBC Radio 1 to spearhead this project, and you can understand why upon hearing him and his cohorts. Zane, Ebro of Hot 97 fame, and upcoming London DJ Julie are powerful and infectious personalities that emanate the same kind of energy and excitement that I haven’t really felt since the last Steve Jobs presentation. As they list all of the broadcast cities and jump in and out of tracks with aplomb, you get a real sense that they are leading a real musical movement. There’s something very cool about hearing the same song as someone in Helsinki, Finland (I chose that location because it’s one Lowe named-dropped during one of his shows), at the same time. But it doesn’t really sink in until one of the anchors pop up to passionately reiterate it. Their passion for the work win out over any perceived annoyance, and you end up just joining the global party.

Apple’s golden DJ trio are more than mouth, though: they also happen to have excellent taste in music. “Discovery” is often the choice buzzword for all streaming services, promising a window to different artists and genres. In my experience, rarely has anyone delivered in the way Beats 1 has. I was surprised by how much music I had never heard before, and how much of it I actually enjoyed. Although some complained of being inundated by Pharrell’s new single “Freedom”, I have yet to hear it, getting acquainted instead with artists like Pryda, Gallant, Skepta, and Gavin James (whose new single “Bitter Pill” should’ve been released on iTunes the second Zane Lowe premiered it yesterday). The genres played were quite varied, although with a pointedly young perspective (anyone expecting Barbra Streisand will be disappointed). Still, it’s clear that much thought went into crafting this station’s identity, and providing a healthy mix of established and up and coming artists to probably the largest listening audience in history. The opportunity to be exposed to more music than one is used to is immense, and these DJs, who clearly enjoy and support their choices, are the key.

This human element is more potent than expected. With more music available in this Internet age, it’s easy to forget how helpful it is having someone we trust help us discover music. I’ve been introduced to more artists in the last four days than I think I ever have, and I never had to leave my Music app. I’m sure I’m not the only one, and that is what will make Apple Music more than just another streaming service. Beats 1 may come off as a gimmick, but its wide reach and ability to open people up to music is unmatched at the moment. And there’s room for growth. I think a Beats 2 and maybe 3, with different tastemakers and genres (AC, anyone), is on the horizon, and I’m interested in to see what other guest DJs Apple will pull into this project.

Apple needs to make some serious refinements to Music’s interface and services, because they’re a mess, but right now, Beats 1 is proving to be worth the price of admission.

0 comments on “Thanks to Beats 1, Apple Music Isn’t A Complete Mess”