Camila Cabello’s career thus far has been defined by guts.

Consider this: while still a card-carrying member of Fifth Harmony, Cabello released two singles with Shawn Mendes and rapper Machine Gun Kelly that ended up more successful than anything she released with the girl group. When she eventually went solo, it was at the risk of alienating her burgeoning fanbase still loyal to Fifth Harmony. Her first set of singles, “Crying in the Club” and “I Have Questions” were good, but didn’t catch fire as they were expected to; she promptly moved on from them. She hit paydirt with “Havana,” a slinky ode to her Cuban roots that is both current and distinguishable from the rest of Top 40, peaking at #2 on the Hot 100. The follow-up to that bonafide smash? “Never Be The Same,” a dramatic drumbeat ballad tailor-made for the Riverdale soundtrack. 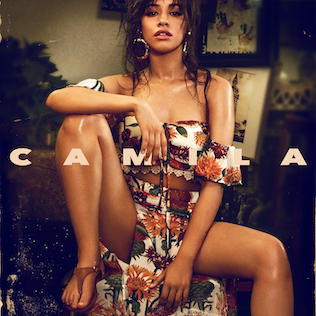 So, what do you expect from the first album of a singer who’s made her career out of flouting pop expectations? Listening to Camila, it’s clear that Cabello is a lot savvier than she’s been given credit for. The record is very lean, clocking in at less than 40 minutes, with no song crossing the 4-minute mark. Cynical eyes and ears might point out that it was obviously engineered for mass streaming appeal, but in an industry where 50,000 units sold is a success, it’s incredibly smart. Camila and team know her audience, particularly how fickle they – and today’s landscape – can be. Why stuff an album with 16 or 17 tracks and risk losing their attention halfway through?

The added benefit of a relatively short album is the lessened opportunity for the most dreaded of album killers: filler. Whereas a more traditional debut would’ve included failed singles and future b-sides, Camila offers a sleek collection of tracks that is also remarkably cohesive. The songs fall into one of two camps – saucy Latin and reggae-tinged uptempos, or acoustic, traditional balladry – and executive producer Frank Dukes is smart in how he ties them together into an authentic and organic package.

It certainly helps that Cabello co-wrote every song, keeping things from getting too generic. To her significant credit, the album is more than solid, with a few truly standout moments. “Havana” is a bonafide smash, a simple but effective statement of intent. “She Loves Control” is a fun, flirty spin around a Flamenco guitar. Cabello’s ballads are equally strong: “Consequences” is a gutting confessional about the highs and lows of first love, while “Something’s Gotta Give” is an ethereal reflection on a breakup. All of the songs do well in showcasing Cabello’s distinctive voice, highlighting her strengths and even challenging her abilities, as “Never Be The Same” does with her upper range.

Once again, Camila Cabello is full of surprises, delivering a confident, assured debut that is both refreshingly traditional and shrewdly current. Camila is the kind of album that sets the course of long-running careers. It may seem risky considering this era of pop anonymity, but Camila has proven time and time again that betting against her isn’t the smart play.

Check out Camila on Spotify and Apple Music.