The biggest crime of Zayn Malik and Sia’s new single “Dusk Till Dawn” is that it’s not attached to the credits of a romantic epic most likely directed by James Cameron. 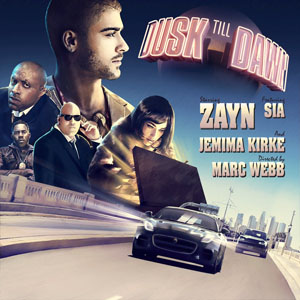 The two reluctant pop stars don’t read as an obvious pairing on paper; Sia and her backwards wig are bold and brassy pop with irrepressible hooks, and Zayn is chilled-out, distant R&B. What they do share, besides their contempt for the stifling music industry machine, is the distinction of being among pop’s most valuable vocalists, with their unique styles and impressive ranges. Hearing two exceptional singers on one track is a rare treat these days, and when you throw in the inherent strangeness of the pairing, Zayn and Sia can at least offer something intriguing.

“Dusk Till Dawn” doesn’t disappoint in that department; I certainly didn’t expect Zayn to release a dramatic power ballad as his next single. The verses have traces of his preferred atmospheric, hazy style, but once Sia joins in, the song barrels into the  passionate wallop of a chorus, demanding full-throated vocal performances from both singers. It’s quite astonishing how well their distinct voices blend together. Sia’s vocals are unmistakable, but Zayn is no slouch, matching her note for note and refusing to be overwhelmed, even making room for some standout vocal moments. The drama packed into the powerhouse production (handled by Adele collaborator Greg Kurstin) and Zayn and Sia’s vocals gives the song a truly cinematic feel. The lyrics are the only dim spot, failing to capture the rest of the song’s emotional tidal wave.

“Dusk Till Dawn” won’t mark any major musical shifts for either artist: Zayn will return to his angsty, dark alt-R&B, and Sia will return to her throne as Top 40’s chief architect. Let’s, then, be grateful for this quick reprieve, where an unexpected pair deliver one of the year’s best duets.