In the promos for Whitney: Can I Be Me?, Showtime’s new documentary on the legendary pop diva, a close friend posits that a broken heart was the cause of her 2012 death in a hotel bathtub. 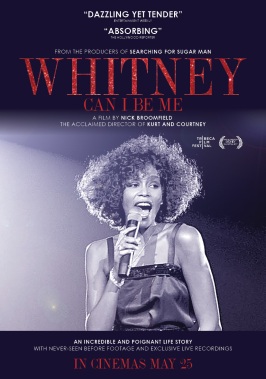 It’s a tragi-romantic sentiment that is better-suited for a Lifetime biopic than a documentary one of music’s greatest vocal talents. If the aim was to uncover the sources of Whitney Houston’s heartbreak, it did so unremarkably. There were no major revelations; not about Robyn Crawford, the film’s secondary focus, and her friendship and possible romantic relationship with Whitney – rumors about them have been bandied about for 30 years. Everyone knows the saga of Bobby and Whitney, our generation’s Richard Burton and Elizabeth Taylor, except with more drugs and domestic abuse. The devastating lawsuit brought by Whitney’s father John in the months before his passing is only briefly acknowledged. Nothing about a broken heart shocks or surprises here.

What does shock and surprise, and enrage, is the astonishing levels of neglect in every aspect of Whitney Houston’s life. Behind the sterling silver vocal chords, beautiful hair and gowns, and record-shattering success stood a woman alone against an industry ready to chew her up and spit her out. The film reconstructs Whitney’s glamorous and not-so-glamorous moments into a damning slideshow of profound sadness. The nervous laughter in her early interviews, the exhausted charm in her later ones, the haggard dishevel in her life’s last stretch; they all tell a dour tale of a woman trapped and isolated in a career and marriage that she wasn’t prepared for. The most devastating shots come from the 1999 European tour that also serves as the documentary’s framing device. Between footage of the powerhouse vocalist on stage, there are startling frames of Whitney as the public hasn’t seen her before: insecure, exhausted, lonely, and sad. There’s a particularly jarring moment of Whitney at her dressing room mirror, head in hands, eyes woefully downcast, that pricks at the heart.

Which begs the question: how could no one see what is so obvious? The previous argument was that Whitney was a master of appearances, and any inner turmoil could be glossed over with a bright smile, a shady side-eye, or that voice. This doc blows that to smithereens. What is left behind are shameful, careless, cynical acts of indifference that come from all sides. The music industry isn’t known for its kindness, but Can I Be Me? lays out the soul-crushing creation of Whitney the diva: the scrubbing of her New Jersey roots, the curation of white-palatable pop, the repeated association with cousin/fellow black pop singer Dionne Warwick. Hearing her label executives so plainly express distaste for black music is striking (and ironic considering that the world’s best selling album came from a black man). And yet, a young and eager Whitney played the game and became one of the era’s most successful artists. That success bore some ugly fruit, from the black community who thought she had shunned them. The 1989 Soul Train Music Awards, where she was audibly booed when her name was announced as one of the night’s nominees, was the tipping point that led her down the path to Bobby Brown and an edgier, blacker sound with her next album (1990’s I’m Your Baby Tonight was notably less successful than her two previous efforts).

But the most harmful cases of disrepair came from within Whitney’s inner circle. The film’s most stunning revelation comes from her former bodyguard, who wrote a letter to Whitney’s lawyers and family detailing the diva’s self-destructive behavior. He wrote of a cocaine overdose during the filming of Waiting to Exhale, and rampant drug abuse resulting in disastrous concert appearances in Singapore. It was meant to be a wake-up call to her loved ones; he was fired. Some of her friends also blanched at her family’s ignorance of her drug use; one friend found mother Cissy’s hand-wringing over Whitney and Robyn ridiculous in comparison. Another cites Whitney’s bankability as a reason for enabling and running her ragged, saying, “when you’re paying the bills, they don’t want you to stop.” With her father as manager, brothers as backup singers, and husband as unwanted guest star, everyone’s pockets were lined by sucking Whitney dry.

But if outside forces neglected Whitney the person, then Whitney herself neglected her gift: The Voice. Her professional insecurities and crumbling personal stability drove her to rely more heavily on drugs, which unraveled her vocal chords. The film is often uneven, but does a good job following the subtle deterioration of her voice on tour. One can try to blame advancing age, but Bloomfield is steadfast in his assertion that the darker forces he uncovers through flashback and current-day interviews were the culprit. Whitney once said that she doesn’t do anything she doesn’t want to do. Well if we are to take her at her word, then she willingly played fast and loose with her otherworldly talent, with results that only withdrew from near-empty account of self-esteem.

Whitney: Can I Be Me? doesn’t reveal anything we didn’t already know. What it does is remind us how little we really knew her. We’ll never know why Whitney was plagued with self-doubt, or her real feelings for Robyn Crawford, or if she knew how well-loved she was across the world. With her singing and speaking voice forever snuffed out, all we can do listen to her passionate proclamations of the greatest love of all being inside oneself, and sigh at the tragic irony.