Let’s just get it out of the way: Rihanna’s ANTI is the messiest album release in recent music history. 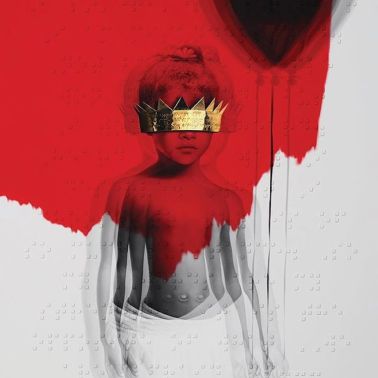 After three singles of varying success, an executive producer change (Kanye was presumably dropped), a puzzling Samsung promotional campaign, and several non-music projects, pop’s most prolific star finally dropped her eighth record last night. She released the album for free on TIDAL, which can be partially blamed for two of her singles underperforming, three hours after the oft-mocked streaming service accidentally leaked it. No matter the album’s quality, or its sales after the one million Samsung purchased for the free giveaway are subtracted, ANTI’s rollout will go down as an unmitigated disaster.

That said, ANTI is a remarkably cohesive album. There is no suggestion of the utter chaos that preceded its release, a Rumours for the Instagram age, perhaps. Instead, it’s a hazy, laid-back meditation on self-involvement and gratification. Rihanna has been celebrated for her “no fucks given” attitude, and it’s on full display here. On “Work”, the Drake-assisted lead (not first) single, she can barely be bothered to sing her own hook, joyfully warbling through most of the whine-ready chorus. Four of the tracks fail to meet the standard three minute length, implying interlude as opposed to complete song. Even the fuller tracks betray, if not shout from the rooftops, that Rihanna was under the influence of something during the recording sessions.

The presence of weed doesn’t necessarily make for bad listening. There are some really good moments that make ANTI worthy of the free download. “Kiss It Better” is a guitar-driven, sizzling sex anthem that recalls Janet at her freakiest and her own classic “Rude Boy”. “Close To You”, the standard edition’s closer, is the best ballad of her career. “Work” isn’t her strongest era-opener, but it’s a charming, flirty, island breeze. Those highlights also serve as the album’s only chance for hit singles.

Say what you will about Rihanna and her artistic integrity, but she can deliver an undeniable pop smash. Listing her #1 hits would also list some of pop’s most iconic moments. ANTI is utterly lacking in them. The songs aim for something darker, grittier, higher, but aren’t that compelling past the first listen. For every “Same Ol’ Mistakes”, another album standout, there are songs like “Desperado” and “Woo” that never step beyond filler. Bitingly boastful as she is on “Needed Me” (one can salivate for days over who she’s addressing on that particular track), it’s familiar territory that she or someone else has traversed with more panache. “Love on the Brain”, which may be the most vocally adventurous, and impressive, of her career,  doesn’t break any ground that Justin Timberlake hasn’t with his super-sleeper hit “Drink You Away”. She may be experimenting but her execution is pretty lazy.

ANTI disappoints because it ignores Rihanna’s guiding principle. Whether she is a dancehall queen on “Man Down”, an EDM diva for “Only Girl (In The World)”, an R&B balladeer with “Hate That I Love You” and “Unfaithful”, a synth-pop goth on “Disturbia”, or pop dynamite on several other tracks, she is our most reliable, taste-defining hitmaker. It is fine, even encouraged, for artists to try expand their musical horizons, but they should still have some kind of vision. Rated R, with all of its post-Chris Brown angst, is still a great pop album that conveys effort. All of her albums prior to this convey effort. “Bitch Better Have My Money”, “American Oxygen”, flops that they were, still felt like peak RiRi. ANTI isn’t bad, but it’s utter absence of trying squanders what should’ve been an explosive comeback.

For Your Consideration (Pun Intended): Close To You, Kiss It Better, Work, Same Ol’ Mistakes