Soap operas have had it really rough these past few years. Long past its 80s heyday, there are only four daytime serials on television: General Hospital, Days of our Lives, Bold and the Beautiful, and the most successful of all, Young and the Restless.

Yes, that means there is no more Erica Kane, although Susan Lucci lives on through Lifetime’s Devious Maids.

Despite the genre’s shrinkage, it seems that the remaining shows have rallied, putting in the kind of effort you wish they had shown before the cancellations of four other soaps within a two year long bloodbath. General Hospital used its 50th anniversary to bring back many popular characters and dig through history for new storylines. Most of their efforts have been well-received, if quite controversial.

Bold and the Beautiful is the youngest of the soaps, only celebrating its 25th anniversary two years ago. The saga of the Forrester family fashion dynasty has the very good fortune of following Young and the Restless, which has spent a virtually uncontested reign on top of the ratings. This safety net might explain why the show may have coasted a bit, especially in the past ten years or so. For a long time, the show recycled a number of quasi-incestuous relationships and love triangles that zapped the show of true excitement. The arrivals of Y&R stalwarts Heather Tom and Don Diamont shook things up, but even their characters, Katie Logan and Bill Spencer, succumbed to the monotony (barring an Emmy reel performance once in awhile).

So imagine the surprise that Bold and the Beautiful is now the most exciting daytime soap opera on television.

How, exactly? Just some stolen kisses between in-laws, some absolutely explosive boardroom meetings, salacious sex, and some epic verbal takedowns. It sounds like your typical soap fare, but what lifts the current frontburner storyline above the rest is how deeply rooted in show history it is.

A couple of months ago, Ridge Forrester (famously recasted last year with Thorsten Kaye) concocted a plan to halfway seduce his brother’s wife Caroline (Linsey Godfrey) in order to wrestle control of the family company, fashion house Forrester Creations, for himself. As you would expect, the plan worked a little too well and Ridge began developing feelings for Caroline, effectively ending his engagement to Katie. That development pales in comparison to what happened when brother Rick (Jacob Young) found out from his newly devious ex-girlfriend Maya (Karla Mosley). It was the most volcanic moment that boardroom had seen since Brooke Logan (currently on-hiatus Katherine Kelly Lang) took control of Forrester Creations back in 1992. What made the scene so powerful was it’s use of history: an increasing volatile Rick laid out every familial frustration he ever felt for his father Eric (John McCook) to chew on, conveying just deep Ridge’s betrayal cut.

Since then, Rick has been on a warpath that can only be described as a hot mess, leaving destruction wherever he goes. He tricked a deeply regretful Caroline, as well as his family, into believing their marriage could be saved, only to use that lie against them all and trick Eric into signing the company over to him, lock, stock, and barrel. That development led Ridge and Eric to a moment of reflection, where they finally discussed, after nearly 30 years, the possible motivations Eric has in marrying Brooke and fathering Rick in the first place, which Ridge figured was retaliation for mother Stephanie’s blind and even Oedipal devotion to him. For long time viewers, it was an absolutely stunning moment in daytime television. For new viewers, it gives a reason to pop over to YouTube to see what all the fuss is about. 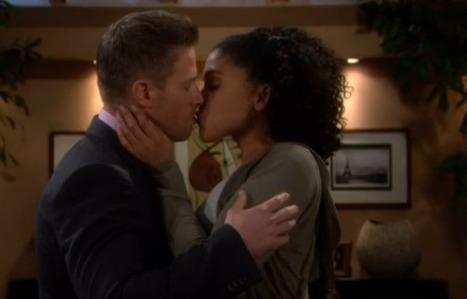 To make things even worse (for the family, great for us), Rick has moved his mistress Maya into the Forrester mansion in Eric’s extended absence, feeding into her dreams of being the new Forrester matriarch. As laughable as that seems, he said as much when he installed her portrait over the fireplace, where Stephanie’s once hung (Stephanie died in 2013 when Susan Flannery retired from the show). Seeing everyone’s shocked expressions to the truly hideous portrait was priceless.

The stakes haven’t been this high for the soap in years, and everything is in delicious chaos. Ridge and Caroline are embarking on a relationship that will surely plague the scandal-ridden company even more. Rick is still in rampage mode, with a delusional Maya by his side. Hopefully there to provide a much-needed dose of reality is newly arrived sister Nicole, who is already shading the life out of Maya after one scene. Bill is back and ready to fight for Katie, who he foolishly cheated on with her sister Brooke. And then there is the original Logan, who is due back on the show this month; what will she have to say about the new status quo that leaves her without a man and a son bent on self-destruction? Nearly every episode has been excellent, to the point of being genuine appointment television for the first time this decade.

Bold and the Beautiful is on a roll at the moment, and it has lasted long enough to assume it’s not a fluke. It’s an exciting time for soaps, and I’m hoping the other three can shake things up too and breathe some new life in a genre desperate for it.