The most surprising thing about Neo Yokio is that star Jaden Smith isn’t wholly responsible fo it.

Netflix’s new anime was created by Vampire Weekend frontman Ezra Koenig, but it feels like an offshoot from Jaden’s relentless Twitter stream of consciousness – what if high class elites were tasked with protecting the world from demonic terrorists? It’s actually not a terrible concept, and there’s no better genre for it than the wonderfully outré world of anime. Unfortunately, Neo Yokio is bogged down by the less desirable traits it shares with its lead voice actor.

Neo Yokio is named for the series’ sprawling metropolis, a amalgam of New York and Tokyo presumably set in an alternate universe (while curiously retaining our pop culture  references). Neo Yokio is touted as the world’s greatest city, which also makes it a target of regular demonic incidences. Kaz Kaan, a purple-haired socialite with a robot butler, is responsible for handling these threats with his magical powers. The only problem is that he is pre-occupied with more pressing issues, like his girlfriend leaving him for a finance job in San Francisco, or whether he can wear a midnight blue suit to a black and white ball. Simply put, Kaz is insufferable. 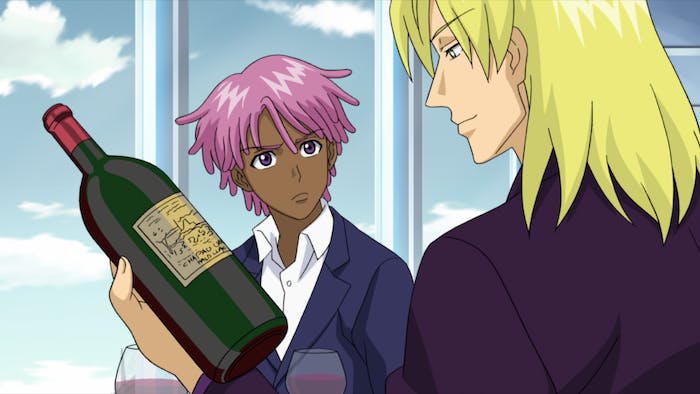 Kaz is the kind of character meant to be parodied, and if Neo Yokio was a better show, it would do so ruthlessly. Instead of sending up Kaz and the elitist culture he thoroughly embodies, it doubles down on his narcissism. The show lends credence to Kaz’s beyond-first world problems, like his status on the Eligible Bachelor Board in the middle of Times Square, without holding him accountable for the shallowness of his existential dread. His two best friends are too busy inventing cocktails to give him any kind of reality check. His Aunt Agatha only chastises him when he’s needed for demon-fighting tasks. Helena, Kaz’s former fashion blogger ex who rejects her old life after a demon possesses her Chanel suit, comes closest to rebuking the vapidity and vulgarity of their lives, but she’s still a snob. No one bothers to challenge Kaz and his limited worldview, which results in a stunted character journey that amounts to an aloof observation that the perfect Neo Yokio may not be.

Kaz is so busy stewing over being rich and popular and impeccably dressed that he barely acknowledges that he has demon-vanquishing powers. Like its lead, Neo Yokio doesn’t take its supernatural elements seriously. We don’t see Kaz express anything but apathy for his abilities, and the surrounding characters are either unfazed or dismissive of them. Kaz’s rival Arcangelo describes the “magistocracy” that Kaz’s family belongs to as being “neo riche” – clearly not a good thing – but it’s never explained why. The show offers almost nothing in terms of lore, no explanations about the mechanics of this bizarre universe. For a show that at the very least dabbles in the supernatural, it’s a critical failure.

Neo Yokio is a series of squandered potential. It thoroughly wastes a talent cast (Jude Law and Susan Sarandon are decent, Jaden is abysmal), decent production values, and an interesting idea on pseudo philosophy and youthful ambivalence that reeks of pretentiousness. In other words, this show is a full-scale production of the most annoying aspects of Jaden Smith’s public persona. You’re better off going to his Twitter for free and immersing yourself in the wealthy teenage nihilism. The only things of value you’ll get from Neo Yokio are the wise words of Karl Lagerfeld and maybe an essay on the importance of cable-knit sweaters.